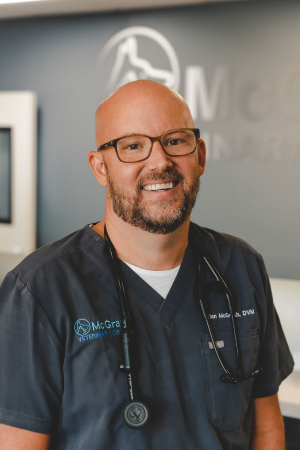 Dr. Brian McGrath is a second-generation veterinarian who grew up in a veterinary hospital (his father is a veterinarian in Boston). He earned his Doctorate of Veterinary Medicine from Tufts University School of Veterinary Medicine. After graduation in 2003, he completed a rotating internship in small animal medicine and surgery at VCA West Los Angeles, where he stayed until joining the team at Malibu Coast Animal Hospital in 2010. In 2016, he made another transition and opened his own practice in Sherman Oaks, McGrath Veterinary Center. Dr. McGrath has experience in emergency medicine, general medicine, and surgery. Throughout his career, Dr. McGrath has had many memorable experiences in the field, including when he volunteered in New Orleans after Hurricane Katrina. He loves that his position as a veterinarian allows him to make long-lasting connections with pets and their owners. He also enjoys helping sick or injured animals and strengthening the human/animal bond. Dr. McGrath and his wife, Lei, have a daughter named Ava, a son named Jax, and a set of twins, Andrew and Joseph! They also have a Labrador retriever named Brady. He enjoys going to the beach, hiking, and just being outdoors with his family and pets in his spare time.

Make an Appointment With Us Today!